A newly-crowned woman of the year has praised the courses she has studied at Accrington and Rossendale College for giving her the confidence, skills and opportunities to be successful. 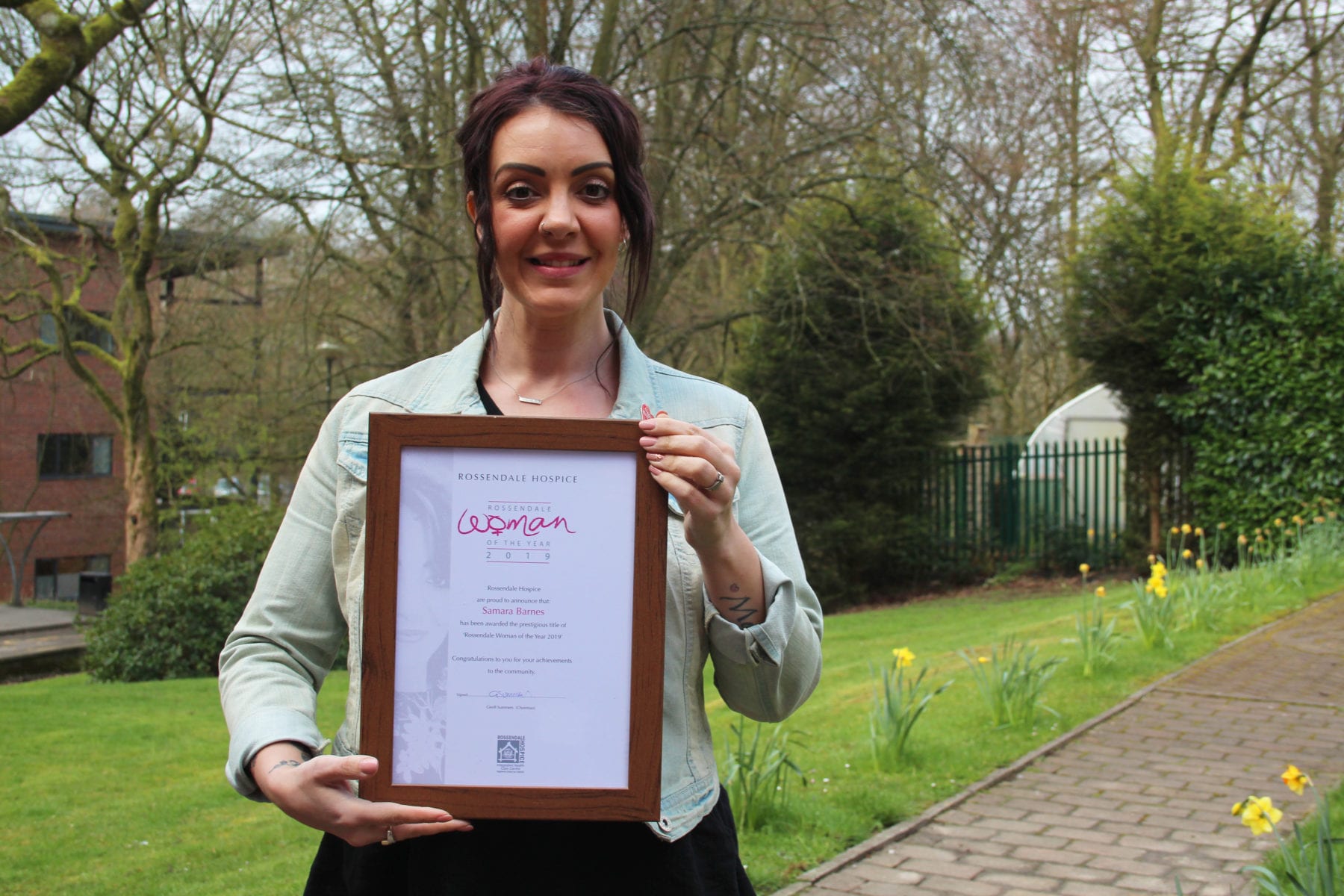 Mum-of-two Samara Barnes, 37, from Haslingden, has been awarded the title of Rossendale Woman of the Year at a glittering ceremony held by Rossendale Hospice for the work she has done establishing the Red Box Project in her home borough.

As well as working full-time in a managerial position at Barnardo’s, Samara also received nominations for the accolade for the work she does as a peer mentor nationally for the charity TB Alert and for her regular donations of breast milk to the Human Milk Bank supporting prematurely born babies.

Reflecting on the award success, Samara says the content of the courses, the knowledge she has gained through her studies and the support she has received from Accrington and Rossendale College’s staff have been invaluable in the work she has done, which formed the basis of the nominations.

Samara said: “I’m still a bit overwhelmed with the award and surprised that five different people took the time to nominate me for the accolade.

“Looking back, after completing the Foundation Degree in Alcohol and Substance Misuse Work I did, I never thought I would have had the ability to go on to do a Level 6 which I am completing now in BA (Hons) Health and Applied Social Studies. It is testament to the college’s amazing staff who inspired me to study at a higher level.

“Some of the modules and the theory I learned in community development and project development have been crucial to helping get the Red Box Project established in the area so quickly, and to get the community on board.

“Other modules in social policy really encouraged me to join in with the lobby of the government to campaign to end ‘period poverty’ in schools. In the Spring statement the government has pledged to fund a scheme to make free sanitary products available in secondary schools but the campaign will continue to extend it to primary schools.”

Samara’s Red Box Project work has seen the number of donation points in Rossendale rapidly grow, and there are now boxes in 55 locations in and around the borough where females can access sanitary products.

Samara added: “Accrington and Rossendale College has played a significant role in my life, and it has also opened additional doors for me with the Red Box Project. I have been able to support female students at the college with sanitary products, and also since the merger, at Lancashire Adult Learning and Nelson and Colne College.

“I’ve had a very good experience studying with Accrington and Rossendale College, both as a 16 to 18-year-old learner, and as an adult learner studying Higher Education courses.

“My daughter is now of an age where we are looking at colleges for her education after secondary school, and I would have absolutely no hesitation in recommending the college.”

New Department for Education figures show that Accrington and Rossendale College is in the top 10 colleges in the country for 16-18 timely Apprenticeship achievement, at all levels – jumping 50 places from 59th to ninth. The college is also now 10th nationally for 16-18 classroom learner achievement at Level 3, moving up 91 places from a previous position of 101st in the country. You can read more here.

A Year 8, 9 and 10 Open Event will take place at Accrington and Rossendale College on Wednesday 8 May from 5.30pm until 7.30pm. This is a great chance to learn more about the college’s provision and extracurricular offer, to tour the campus and view its high-tech facilities, and meet expert tutors and members of the Careers Team. Visitors can also take part in a range of exciting ‘have a go’ activities.

Are you currently in Year 11 and starting to think about your options for...

Are you currently in Year 8,9 and 10 and starting to think about your...

Have you applied to Accrington and Rossendale College to start this September? Look out...

Good luck to all students receiving their GCSE results. We look forward to welcoming...

By submitting this form, you consent to be contacted about Accrington & Rossendale College’s courses, products and services, as well as our public facilities. Accrington and Rossendale College is committed to safeguarding your privacy. If you want more information on how we collect and use your personal data, please read our privacy policy and cookie information page at Information Governance
We use cookies on this site to provide you with a great user experience What are cookies?