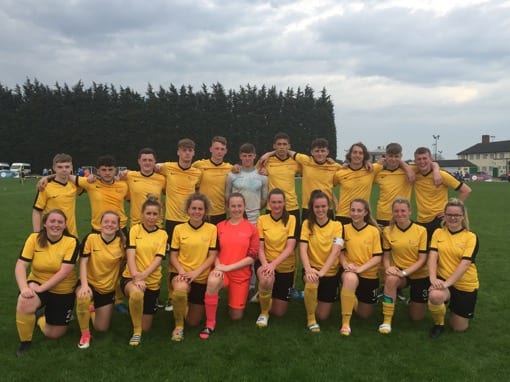 College students travelled to Nottingham University on the weekend to take part in the championships, which is held every year in April. AoC Sport is the lead organisation for sport and physical activity in colleges. A subsidiary company of the Association of Colleges, AoC Sport’s vision is for every student to participate regularly in sport or physical activity, to achieve significant benefits in terms of education, employment and health.It involves each region in the country competing in a variety of sports to earn the prize of best region in the country.

This is the second year that Accrington and Rossendale Colleges football academies have represented the North West at football.

The tournament was held over the duration of the weekend – three days in total. The girls’ team enjoyed a nearly undefeated weekend, only losing one match.

“The effort from them all this weekend has added to the success of finishing third in the league, qualifying for the playoffs and reaching the quarterfinal of the English Schools FA Cup. I am very proud of all them for their efforts.”

Head of Girls football, Gemma Donnelly, also shared her thoughts on the weekend:
“We have had a fantastic weekend. There was always going to be pressure on the girls coming into the competition as the current National Champions. They all wanted to win the competition but we took each game as it came and put together a fantastic run. Becoming National Champions for the second year a row is an incredible achievement, one that they will all look back on in years to come. Every girls has represented the college and the region with class and some of the football we have played has been fantastic.”